This month has seen people march through the center of Dublin, highlighting the epidemic of homelessness. We have seen similar actions like this not only take shape in Ireland, but across England and further afield.

Many have come to realize that homelessness is a symptom of a broken system and want to see it completely eradicated. It’s possible to do by those in power if the will power was there but it’s not, at least not from what I have seen and experienced. 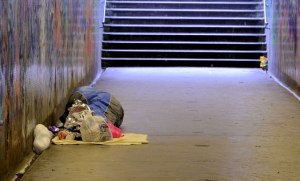 Focus Ireland estimates that over 5,000 people are homeless at any one time across the country. THIS IS NOT RIGHT. Especially considering the many thousands of homes and derelict buildings that are empty which could easily house those who have found themselves homeless.

Those figures don’t include the hidden homeless people living with relatives, living in temporary accommodation etc.

Up and down the country repossessions are happening, turfing families out on the streets. Indeed, many thousands are in danger of becoming homeless in coming years, but we are seeing opposition to these actions with the people organizing and fighting back.

There was a very goo

d turnout at the march for the homeless this time in Belfast city center, as a community rise up and speak out against the neglect and inhumane conditions a lot of people are forced to live in.

We are in dire need of housing, but the status quo that exists up in Stormont and the sectarian politics only helps hamper the building of new homes. We are in great need of a new kind of politic that transcends the sectarian divide and incorporates everyone as one community. Only then can we truly start to tackle the major issues including Homelessness.

In recent years we have seen businesses installing spikes or fencing off areas to stop the homeless from getting shelter, and we seen the removal of squatters rights which meant even more people found themselves on the streets. This is seen as a full frontal assault on some of societies most vulnerable, instead of addressing the real issues that have caused these problems.

We, as a society, must break the stigma and stereotypes of homelessness. Not everyone who has found themselves living on the streets or in temporary accommodation are to blame for the situation they find themselves in, and not everyone is on the streets through problems with drugs or alcohol. Even those who are there in connection with these problems, often have deeper seated issues which are also being neglected, as onlookers treat them like a lower class.

The time for action is now, it is appalling that it has taken this long to gain the support that it has. With politicians playing class wars so often, it is time to realise that we the public will always be a lower class to the elite, and therefore we must use the power we have to stand up and be counted.