A report into the CIA’s illegal and unjust rendition program, which seen hundreds detained indefinitely throughout the globe, has been released detailing detainees details and information of their detentions.

The names of 119 of the detainees were released last year by the US Senate Intelligence Committee. The damning report gave details on the CIA’s rendition and interrogation methods, which included torture – we also reported on this when it was released in our article ‘It’s only the tip of the iceberg: Release of CIA torture report.’ It was no surprise to us the methods used by the CIA to extract information from detainees who were basically kidnapped by the CIA and then held indefinitely. 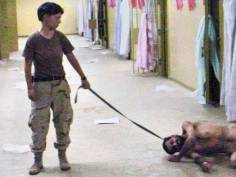 The rendition program was a global operation with “Black Sites” based in countless countries including Ireland. Shannon airport has been used for many years now not only for the CIA’s rendition program but also as a stop off point for the US armed forces before leaving to fight the unjust wars in the middle east.

The CIA continuously give the false impression that it was acquiring unique information by using torture techniques. In March 2005, the CIA submitted inaccurate examples to the Department of Justice pointing out the “effectiveness” of the interrogation techniques which were said to have saved lives, now we know this to be untrue.

On September 6th, 2006 briefings to the full Congress Senate committee began, much of which contained inaccurate descriptions of how the Torture Techniques were useful in obtaining unique information from detainees.

The CIA also supplied the White House with false, inaccurate information on how effective these techniques were, this prevented an accurate understanding of the program by executive Branch Officials in turn preventing proper oversight. This inaccurate information was also provided to other arms of the U.S. government and then later to the public.

Office of Public Affairs for the CIA and senior CIA officials coordinate with a select few within the media industry in order to counter criticism  and in order to sway public opinion in favour of such techniques to combat an overblown threat of terrorism. Other agendas were also at play – the CIA did not want to have potential congressional action that would seek to restrict the programs being implemented by them.

Much of what was reported on by mainstream news outlets  was inaccurate or just down right false, and was similar to the information provided by the CIA to Congress, the Department of Justice, and the White House.

This facility was the place where the use of such degrading and inhumane torture techniques became the norm. At one point nearly half of the 119 detainees were kept and interrogated here by CIA operatives including medical staff.

The facility itself began operations in September 2002 and was nicknamed the “Dungeon” because of the dire conditions detainees were subject to, and in fact one detainee who was held partially nude chained to a concrete floor, was found dead – the cause of which was listed as being hypothermia.

The CIA contracted two psychologists James E. Mitchell and Bruce Jessen to further develop enhanced interrogation techniques which were subsequently approved for use on Detainee Abu Zubaydah. Prior to the termination of the psychologists contracts in 2007 they received a large sum of money for their work.

Not too long after these men were contracted, the CIA subbed much of the interrogation program to them – at the end paying out almost 81 million dollars to their company. One of the two contractors had the nerve to come out and try to justify his actions but received backlash from his colleagues for participating in these inhumane acts.

In his book The Longest War, author Peter Bergen writes:

The CIA contractor, a psychologist, had not interrogated anyone before, nor did he know anything about Islamist extremists or the Middle East. [Other] professional interrogators with him watched the new approach [“the enhanced interrogation techniques”] unfold with astonishment. [At] one point, Abu Zubaydah [the 9/11 detainee] was sitting naked on the floor, and the CIA contractor insisted that his new experimental interrogation techniques were working on the prisoner:

Abu Zubaydah was later “waterboarded” eighty-three times by the CIA. […] In the end the multiple waterboardings of Abu Zubaydah provided no specific leads on any plots.

In interviews which were conducted in 2003 with the Office of Inspector General, the CIA leadership and senior attorneys stated that they had very little awareness of what was taking place at the COBALT facility. Some even believed that such degrading and inhumane techniques were NOT being used to extract information from detainees.

The CIA went out of its way to keep this program under wraps for as long as it could, lying not only to the US government itself, but lying to the world – which ultimately gives them powers to do as they please anywhere in the world.