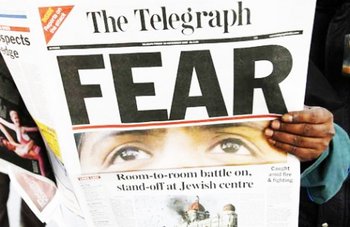 With the fiasco of the SSMS private security firm fake bomb find in Old Trafford and the drills taking place in Trafford with police caught on camera shouting “Allahu Akbar” have left a huge impression on the people, covered by the world’s media and broadcast to millions, it clearly shows us why in today’s age the people are trembling in terror at the thought of having their lives taking  away at any moment by Islamic extremists.

On May 9th Manchester police held terrorist training exercises designed to replicate the Paris and Brussels attacks. The operation directly linked Islam to terror, when a police officer shouted “Allahu Akbar” during the exercise. The police said that the phrase was always going to be shouted during the drill.

Then, we had the huge May 15th fiasco of the fake bomb find and huge security alert behind it. Security Search Management & Solutions Ltd(SSMS) the private security firm behind the fake bomb were contracted by Deacons Canines to test its dog handlers. The fake bomb was blown up in a controlled explosion before the firm owned up.

The two drills coupled with the media’s coverage of them, shined a light on a bigger situation surrounding the fear driven media telling us to be afraid of our neighbours. This coupled with far right narratives being given a platform from which it is then able to tap in to the fear and discontent that has spread throughout the populations of our nations is a very real danger.

There is no doubt there is a global threat of terrorism, but the media portrays the global terror threat and it by passes the causes behind the threat, and the fact that a lot of the governments who claim to be tackling this threat are behind the rise in the very groups that pose the threat.

What we must understand is that the global terror threat is being exacerbated by the media, but again the threat is real and people are being killed. In all the attacks that have taken place in europe they have had questions hanging over them, for example, why did security services not detain suspects which they believed were, suspected terrorists?. Why would these so called terrorists leave behind their passports each time? Very convenient. With the major security and NSA/GCHQ spying overhaul, how come these people were never tagged and arrested?. There are many questions to be answered.

What else would the ordinary man and woman do when all they are subjected to is coverage of terrorism and how the terrorists are coming to kill them? They will react in fear and anger at the unseen enemy, it will play on their emotions leading them to make a conclusion that they are under imminent threat.

Control of the masses by the media has had a major role in keeping people in place, in helping bring about draconian laws and legislation to subdue the people, all under the guise of security. The ultimate cost of all this is the human cost. The ordinary people are always lost under this blanket of fear, they are scapegoated and subjected to the fear and the emotions of their neighbours.

Divide and conquer was always a tool used to great effect, in dividing the people, causing fear and paranoia. We must look at events with a critical mind, we must not be blinded by Patriotism, Idealism or prejudice.