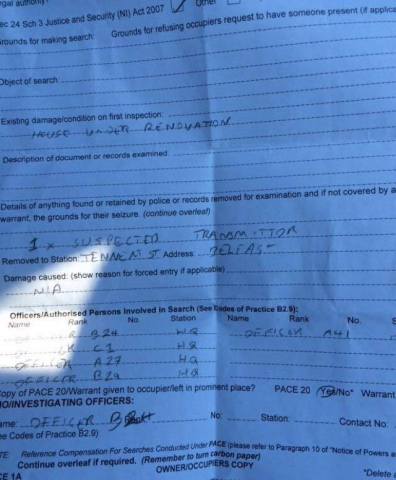 In the grander scheme of thing’s these devices come part and parcel with the on going campaign against Republican activists and the Nationalist/Republican communities in general by British state Intelligence services.

It’s of no consequence that most of those targetted would be against the path of Sinn Fein and the signing of the Good Friday Agreement, which has brought about relative peace, but has also brought about a new chapter in the dirty war.

With the signing of the Good Friday Agreement and the rise to power of Sinn Fein, people would be forgiven for thinking that things were fine and the times of the dirty war long gone, but they’d be wrong. For some the North of Ireland is seen as a success story, with its peace process and the demilitarization of communities, but if you take a look under the surface, things are not as they seem.

It’s a fact that relative peace has been a positive of the Good Friday Agreement, but i say relative, because we are still yet to see the end to sectarian attacks, political policing, attacks on communities, dehumanizing conditions within our jails, the use of Diplock courts and an end to the dirty war and the dirty tactics used by the British state to subdue any political activists or groups it deems a threat.

Today the 2nd of June, we have seen yet more surveillance equipment installed within the property of another political activists property. During renovation work, which was being carried out in a home in Ardyone, North Belfast. Builders were carrying out work at the home of a well known political activist called Thomas McDonald when they discovered what they believed was a transmitter and listening device in the ceiling after removing plaster board.

The workmen alerted Mr.McDonald to the find, as he was making his way back home several PSNI land rovers pulled up outside, police officers proceeded to enter the property asking the workmen to leave.

A spokesman for a political pressure group Republican Network for Unity said after police ordered builders to leave the property of Mr.McDonald they locked the doors and closed over the curtains so as no one could see what was being done within the property. Police refused entry to the owner of the property.

A sheet provided by police to Mr.McDonald confirmed that they had removed a surveillance device from the property. The Republican Network for Unity spokesman said

“Republican Network for Unity demand the state forces immediately allow this man to live his life free from harassment and unnecessary state spying.”

A spokesman for the PSNI said; “Police can confirm that a house was searched in the Ardoyne area of North Belfast on Tuesday 31 May”.

This is one of many situations faced by residents not only of the Ardyone community but communities across the north.